Wow, it’s been 7 months since I last blogged. I’ve had so much going on that I have neglected this poor blog so thought it was about time I updated.

In January we welcomed the newest addition to our family, a little boy. I would like to introduce you to Little D 🙂 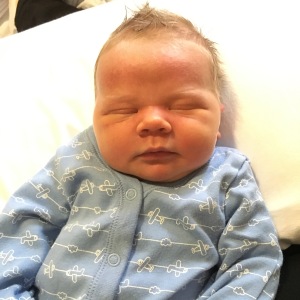 He is now 17 weeks old and looks more like this 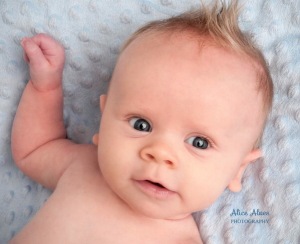 He is mostly a great baby but he does seem to have an aversion to sleeping for more than 4 hours at a time at night or at all during the day but he feeds well and is such a good natured wee soul. Which is just as well as he is smothered with love by his sisters whether he likes it or not.

He has settled into a good routine already and fits in well with the girls. There are some days when Mr B comes home from work and I honestly don’t know where the time has gone but we are getting there. I’m pretty sure my house could be a bit cleaner or my ironing more up to date but priorities and all that. We are all fed, watered and taken care of and the essentials are all done.

So onto my birth story. I was scheduled to go in to be induced because of the issue with my bloods so I made arrangements for the girls, we all had a nice dinner together and headed into hospital on a Sunday night. It was really odd, I have been induced before so knew what to expect but this time it was different. We went in at 8pm and hung around for a while before we were seen then I was examined, given a tablet and Mr B got sent home. Last time I was induced, they examined me, popped my waters and then Miss C was born 3 hours later so I assumed the same would happen but that’s not how it went.

Nothing happened through the night and I managed to get some sleep but I was strapped upto a monitor and little Disco Baby was in full on groove mode because we just couldn’t get a decent trace.  The next morning Mr B came back and after the shift change I was examined again. The midwife gave me a sweep and things started moving. I was moved to a labour ward and we started to get organised. My littlest sister Louise was going to be there for the birth so Mr B called her and told her to head over. Thankfully things started moving well on their own so I didn’t need a drip. We had a midwife and a student and they were both great and so supportive through the whole thing.  Music is a major thing for me and I spent ages updating my playlist from when I was in having Miss C and there were several times during labour that we were all having a singsong, it was great and just what I wanted.

My previous labours I have been lying down but this time I wanted to stand up and they were fine with that. They got me an exercise ball to help move things along and it did pretty quickly. Louise arrived and was instructed to stay away from the business end which she was happy to comply with. Things started moving really fast and with the help of some gas and air I was ready to go. I was doing really well and had Louise and Mr B at the other side of the bed holding my hands and cheering me on. All was well until I heard the midwife say something about shoulders. I was in the middle of a contraction and when I opened my eyes Louise and Mr B had moved over and had worried looks on their faces.  Suddenly there was a sea of blue uniforms in front of me and a lot of commotion. The senior Midwife appeared and told me the baby was stuck and they were going to have to put me up on the bed and cut me to get him out. I was not having that and told her I could do it myself. We agreed that I would have one more shot before they intervened so I pulled myself over the bed, grabbed Mr B and Louise’s hands and pushed for Scotland! Thankfully it did the trick and Little D was born without the need for any intervention. He was taken straight to the cot and was checked over by loads of Doctors and then was given back to me for skin to skin. It was all a bit scary for 10 minutes but as soon as he was in my arms and I was reassured by the midwives that he was ok I could relax and enjoy him.

I wanted to try to breastfeed again and given my problems with the girls I wasn’t sure how it would work, but within half an hour of being born he was latched on and feeding. Now, If I’m honest I think this was a bit of a fluke but I was really fortunate to be helped by the amazing Breastfeeding Support Workers who showed me some new techniques and tricks to help and 17 weeks later we are still going strong. It’s been really tough at times but I’m so proud that I’ve been able to do it for him so far and will continue as long as I can.

I wasn’t sure what it would be like having Louise there but she was great and it was lovely being able to share such a special moment with her. She has been desperate for a nephew and needless to say she instantly fell in love with Little D. She disappeared not long after he was born and let us have some time to ourselves before the girls came up to meet their brother. Miss B was smitten as soon as she saw him and Miss C was really interested and loved touching his face.

The antibody issue with my blood meant that when he was born he was like a little cherry tomato and he had to have blood taken every few hours. Unfortunately the levels in his bloods weren’t dropping as fast as they wanted and we ended up being in hospital for 5 long days! Again, we were looked after really well and the Neo Natal department in Wishaw General were amazing. I can’t tell you the relief to get home to Mr B and my girls. Miss C was really upset when she was in visiting so we decided to keep her away but I missed her like crazy and was so happy to see her little face again.

So that’s it, I had another great labour experience in Wishaw. Life goes on and all of a sudden 17 weeks have gone past in the blink of an eye. I am fricking exhausted and we’ve had a few rotten down days but I am smitten and feel like my family is now complete.